This article is the second in a series that explains what we learned and how we discovered new performance improvements. It’s focused on the dev environment.

The first article guides us through multiple new optimizations for the prod environment. You should definitely read it first.

On each request, the dev environment has to :

In Symfony, config is mainly in YAML, XML or annotations (it can also be PHP). For a few years now, we’ve also had autoconfiguration and autowiring, which needs to know everything in your application and dependencies to be able to link the right stuff to the right place.

The doc itself says:

But it is quite uncommon to modify everything all the time, maybe we can do something to reduce this slowness. How does debug work?

So we need to check:

We will do it in reverse: let’s go see how it is watched, it will help us to understand what is really used, how and what we should avoid.

Section intitulée how-is-it-watchedHow is it watched?

Doctrine and Symfony have their own ways to ensure proper freshness. They can be redundant.

In the book Symfony 5: the fast track the last chapter is Discovering Symfony Internals. It explains how we can use Blackfire to understand Symfony Internals. That’s exactly what I did and so, I will extend this chapter here. More precisely, let’s talk about what happens in Kernel::handle().

What interests us here is the $cache->isFresh(). Under the hood, it’s ResourceCheckerConfigCache in action.

The $this->resourceCheckers is not interesting (it seems there is only one, and not an interesting one; SelfCheckingResourceChecker). The $resource however is very interesting: we are finally in the right place, where everything happens.

What are all the ResourceInterface proposed by Symfony?

Just the basic analysis of these classes leads me to these discoveries:

For that kind of stuff, there is no wait, I ran on sfDev slack to check with Nicolas Grekas what was happening. Together we understood there was a bug for Alpine based PHP setup because the condition was based on the existence of the system’s constant GLOB_BRACE which is not present in Alpine. It forces us to use the slow path for every GlobResource, which was dramatic, performance wise.

Nicolas fixed it in 4.4 and everyone is happy. 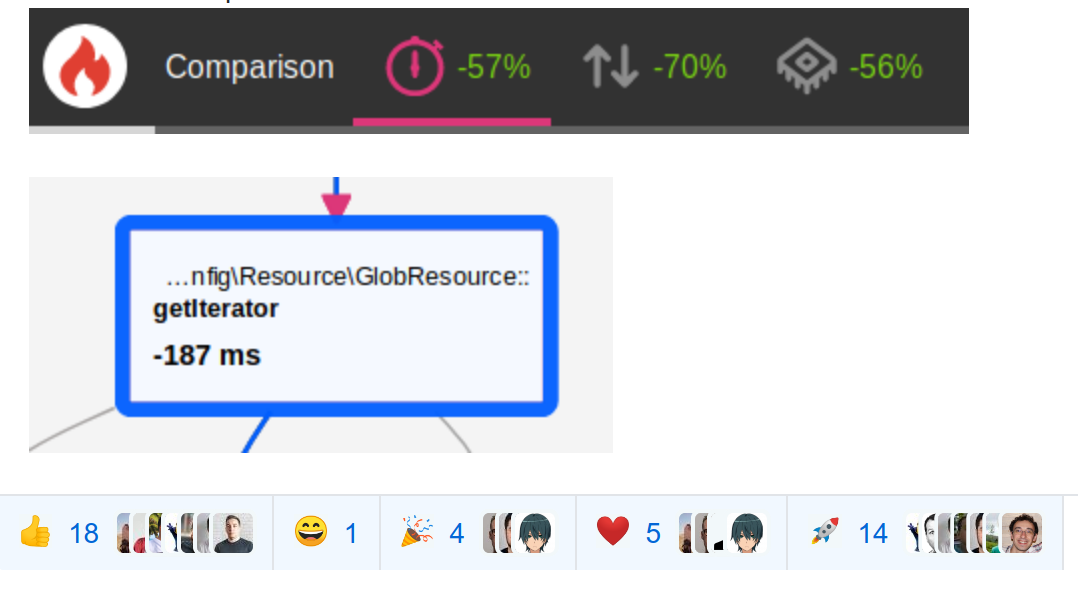 This fix alone greatly enhances the docker experience for our developers on MacOS.

The doctrine/annotations project is a hard dependency for everyone using annotations in classes. It’s widely used by Symfony and API Platform, not just for Doctrine ORM / ODM. Doctrine has a different way of doing checks. There is no global state as it’s only used as a library. The CacheReader has a cache but calls filemtime for each file and all their related files again and again for each class, properties, and methods.

This generates way too many calls to filemtime (10951 filemtimes for only 96 files) so I opened a pull-request. 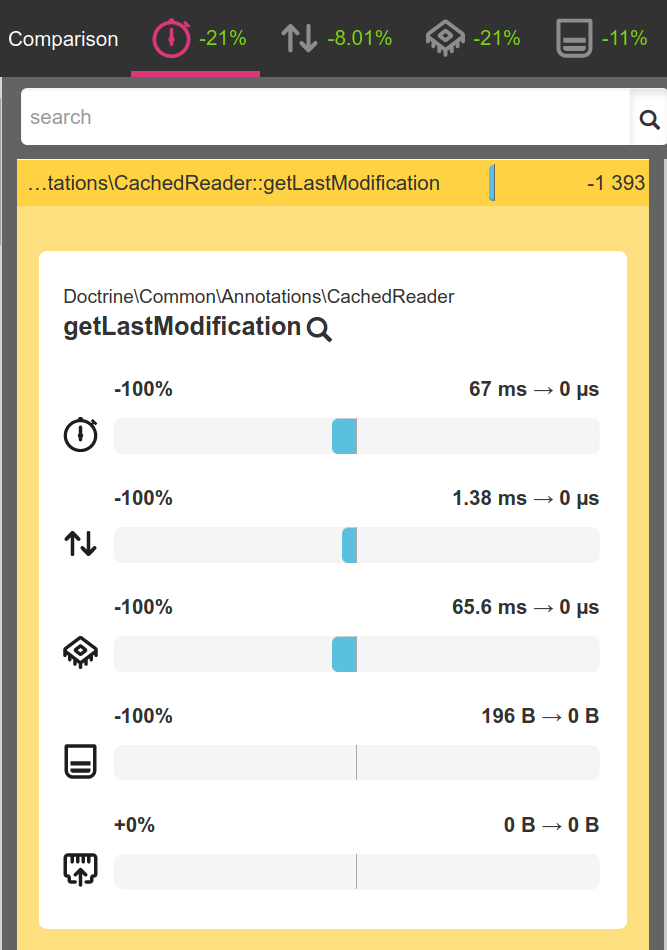 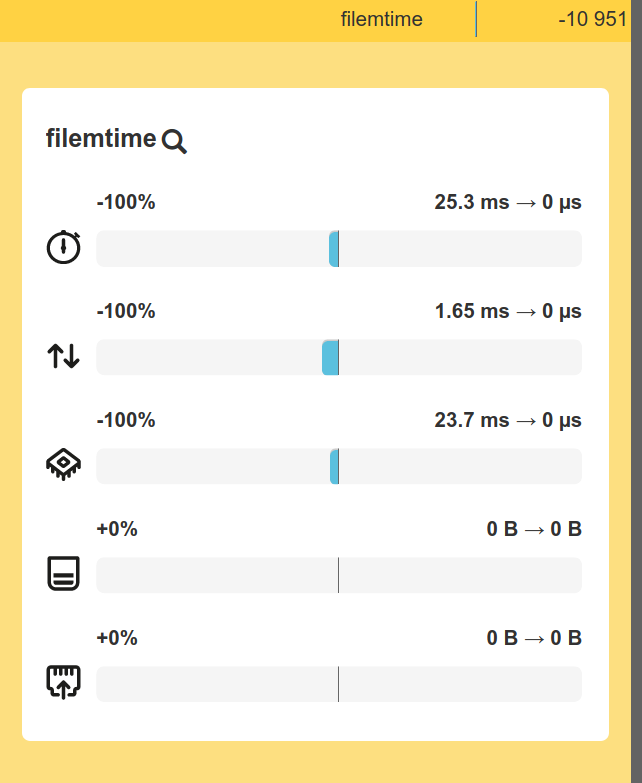 It was not easy to get it merged because there exists a slight possibility that someone somehow uses this “feature” in a long running process where the annotation cache itself will have no way to be cached, but new annotation in a file will be authorized. I mainly see it as a bug because it could cause side effects in so many cases. Eventually, the maintainers were ok with that and merged it and will be released for the next minor, 1.9.

Section intitulée what-is-registered-for-a-freshness-checkWhat is registered for a freshness check?

1/ Kernel stuff Now that we know all the different ways to do freshness checks, let’s see how Symfony, bundles and our code use them.

Let’s continue where we left off, after $cache->isFresh(), $this->buildContainer() is called:

The resource tracking begins with ContainerBuilder::addObjectResource($this). The abstract of it is:

Which brings us to this new method:

This is the place to be. We find here almost all the resource trackers and how they are called. The $this->inVendors will add the ComposerResource we talked about before.

We can see that when fileExists() is called from buildContainer(), the second parameter is not set to false, so their content is tracked. Under the hood, it will use DirectoryResource and FileResource, which means that if ANYTHING changes in the given file or directory (even a CS fix or a PHP Doc), the container will be rebuilt. The PHP classes that are tracked like that are the ones that are used to build the container itself. Touching them means modifying how the container will be built, and as we can’t know for sure what the changes mean, we rebuild it as a precaution.

This means that working on the Kernel or CompilerPass level is annoying because you will rebuild everything at each call. But this is for good: every computation made in compiler pass will be made only once for all subsequent requests. For example, if you have some configuration for a service that is written in YAML, it’s much better to parse the configuration in a compiler pass and inject the array in the service, rather than inject the file and parse it at runtime.

Next function call is Kernel::prepareContainer() that calls the Extension class of all bundles and register the bundle class as content tracked. We build all the bundles then the Kernel itself. The last one is $kernel->build() , which is an abstract method that lets you hook this in your kernel app. For us, it’s handled by MicroKernelTrait.

You can see here the use of /**. This is the slow path that costs so much. Previously it was a bug, but here we use it voluntarily, to allow the developer to gracefully reorder their config package files into subdirectories. I personally never rearrange anything in these directories as they are generated by flex and I’m totally fine with that. It was only after finding that optimization on my side that I discovered that since 2019–11–19, the default for new Symfony projects was to replace the use /**/* with /* (see the changes).

You should ABSOLUTELY check your Kernel and remove all the /** if you are not using a nested path in your config/packages directory, or consider flattening it if you do. This is a ridiculous performance penalty to endure for very little gain (and I’m not talking of the env directories config/packages/test, config/packages/dev and config/packages/prod, they are fine).

The fixed version looks like this, taken from the symfony/recipes repo. This is the Kernel you will get if you create the app now:

Please note that for the 5.1 release, this code has changed.

2/ Configuration For anyone used to Symfony, the name of FrameworkBundle should ring a bell. It is what defines Symfony, not as a set of relatively independent components but, as a Framework. This is what gives all the opinionated stuff. The FrameworkExtension is a beast of a class: no less than 120 use, 2063 lines and 41 methods. This is the glue that makes everything work as designed. You will not be surprised that it makes 17 calls to fileExists. They are in charge of loading translations, validation, serialization mapping directories and files, following the paths given in the build phase of the container.

Other extensions add their own resources (think config/api_resources for API Platform).

3/ Code Here comes almost the last useful stuff for this chapter: our code! All the previous resources were meant for config or Kernel / compiler stuff, but nothing for our code. It’s handled by Kernel's call to $container->compile().

It’s beginning to be a very very long article so I will spare you the code, but it goes through all the classes registered as services manually or via all the methods possible in Symfony (hello autoconfigure) and make them a ReflectionClassResource. And so, if you change a public attribute of one of your classes, the container will be rebuilt.

You can tell Symfony to add / ignore some resources at once.

4/ Routing The routing config is injected by our Kernel:

Same as config, you should absolutely avoid the /**.

5/ Recap of all resources checked

So… we now have seen how this stack works. What can we see?

You can see that there is a DirectoryResource on serialization and validator config, so if something changes there, the container is rebuilt. Despite that, the YAML/XML files inside these folders were parsed AT RUNTIME EVERY TIME. I made a PR so they are only parsed once during the life of the container. The trick is to use a magnificent proposal from Teoh Han Hui in API Platform to make use of a warmer (called at container boot) to actually clear this cache. It works well in API Platform, so I just ported it on Symfony to cache this YAML parsing. It will also benefit API Platform (and a lot of other projects). 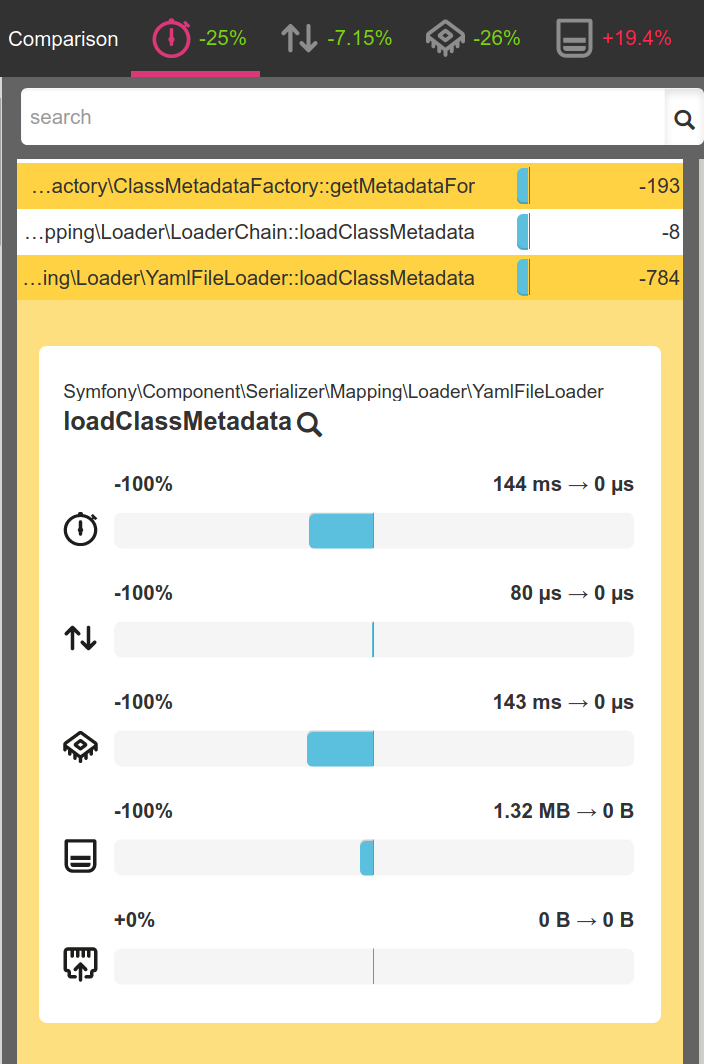 Avoid parsing annotation if you don’t use them

I do use symfony/symfony and I saw that I had an annotationLoader for stuff I didn’t want, and the cost is not harmless for performance. You can really disabled them with:

I also opened a discussion about that on the symfony-docs repository.

In API Platform, you can have all the configuration as annotations, YAML and XML. To be able to provide the best DX, there is some watcher to reload the container build if you change any annotation.

Check that you do not have that config. Because it will check this directory again and again (along with a lot of others watchers) for nothing.

Before ending this chapter, I want to add a special mention to all the safeguards in place to handle locks on container compilation: avoid concurrent queries to build the container at the same time. Without that and before all these new optimizations, it would have been impossible to work.

The profiler works in two phases: first collect everything during the request and store it, then displays it in parallel with the result.

The collection itself can cost a lot.

One of them was tricky to explain even to the maintainer. With Doctrine, to create a database schema, you:

I proposed to put it behind a feature switch, as it can always be accessed via Symfony command console (in CI for example). It got merged and will be released for 2.1. 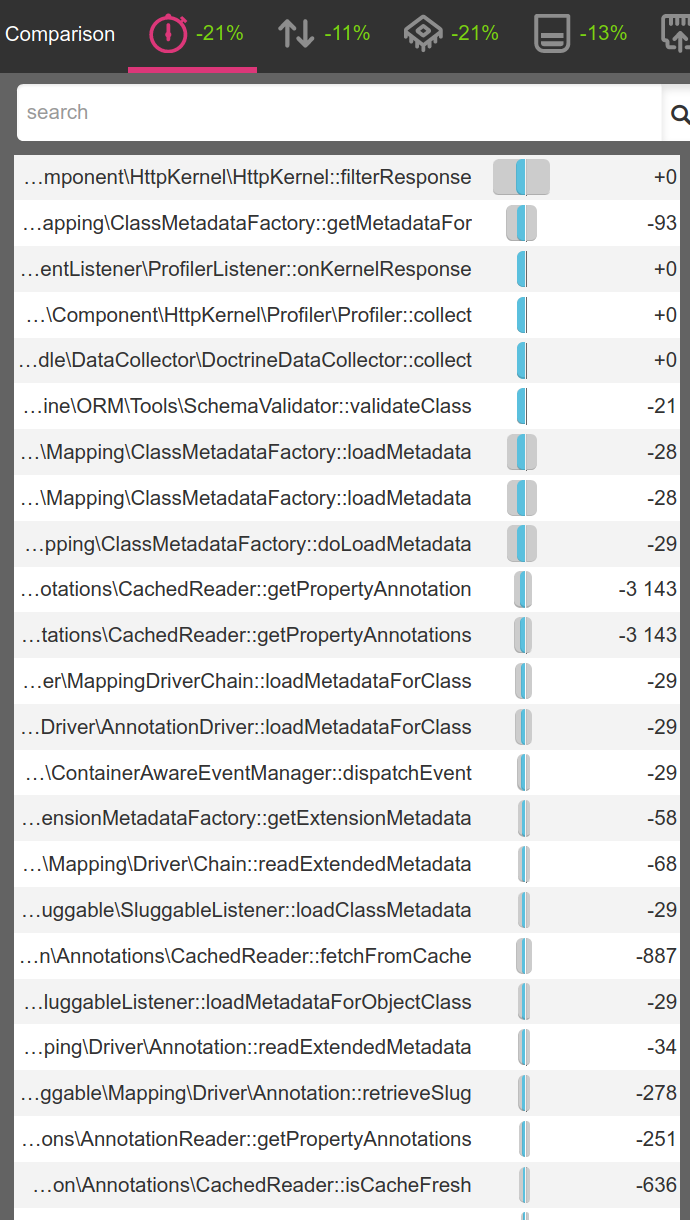 FYI: how many times do you really watch the profiler? Do you know you can disable it and still benefit from some of the debug mode (SQL queries in log, Exception well caught)?

Section intitulée that-s-all-for-todayThat’s all for today

That concludes our second run of performance improvements. We learned a lot about how the dev env works and what brings the dev experience together. I hope that you learned something today and the performance of your dev environment will benefit from it as much as mine.

The next article will recap what we learned and will focus on how better Symfony developer environment can be, and what I dream for us PHP developers.

Battle log: a deep dive in Symfony stack in search of optimizations 1/n

My team and I are working on a big project that is becoming bigger and bigger. Split in micro services, each end-user call generates an increasing number of HTTP API calls. Performance was becoming a problem and the Developer eXperience (DX) suffered as a result. Note that we already…