My team and I are working on a big project that is becoming bigger and bigger. Split in micro services, each end-user call generates an increasing number of HTTP API calls.

Performance was becoming a problem and the Developer eXperience (DX) suffered as a result. Note that we already have a perfect stack on paper. Everything is up to date, all the default optimizations are already in place.

It’s time for a deep dive in search of NEW performance optimizations.

This adventure will lead us through many Blackfire profiles and two big concepts of Symfony’s stack:

These are the two hot paths for API developers and the ones I worked on the most.

This article is the first in a new series that will explain what we learned and how we discovered new performance improvements. We’ll recap all the performance tips you can use on your projects, and the next steps we expect to follow.

The second article is out and focus on the performance in Symfony dev env.

At the beginning of the project, developers were mainly using MacOS but many switched to Linux for a lot of reasons, one of them being the poor performance of the stack. For the ones that remained on MacOS, we created pomdok which uses the Symfony binary on the host (french blogpost presenting it 🇫🇷). Even then, performance was not good enough to work efficiently.

So I started digging.

On a normal Symfony stack, there are three Symfony environments (a confusing name): dev, prod and test. If it’s slow in prod, it will definitely be worse in dev. So let’s go see what we can optimize there first.

The prod environment should follow theses principles (best described in this wonderful documentation):

The dev environment is the opposite:

Everything works pretty smoothly and a search for the tag “performance” in the GitHub Symfony repository does not surface many complaints.

Let’s start with the prod environment.

Before looking for problems in our dependencies, be sure to audit your own code.

TL;DR: there are two things to check: event subscribers and normalizers. They are always loaded, always checked. They should have no dependencies, or they should be lazy.

Yep, I created a route that does nothing more than saying “ok”. The goal is to see the cost of booting the app. Chase the usual suspects, stuff that should not be there:

If they are present here, they will be everywhere. So we need to deal with them.

In my case, I had some event subscribers that had a Doctrine Repository as a constructor dependency, as well as a few others services. That resulted in booting a lot of services for nothing.

I wasn’t in the mood for refactoring, so I just made them lazy.

Second test, the serializer. The serialization stack in Symfony is always improving and is good enough for a lot of cases, but there is room for improvement.

Let’s add some new methods to our controller

The basic algorithm of the serializer is:

The normalization and the serialization can certainly be optimized, but this is not where we will dedicate our effort. We will work on all the side jobs that lead to it.

The things I fixed on our side:

1/ reduce the serialization groups to the minimal to avoid working on non useful data (the fastest code is code not executed);

2/ don’t forget to configure the max depth level. An indicator we use for that is the weight in kilobytes of the response, we had some in the megabyte range;

3/ BE CAREFUL WITH CUSTOM normalizers. They are all constructed at the start (so the same as event subscribers: no dependencies) and they are ALL checked for all data. You can reduce it to “all data types” by making them Cacheable: a normalizer is cacheable if it only depends on the object’s type, which is almost always the case. It can’t be cacheable if it depends on the context.

Having just one non cacheable normalizer costs a lot: 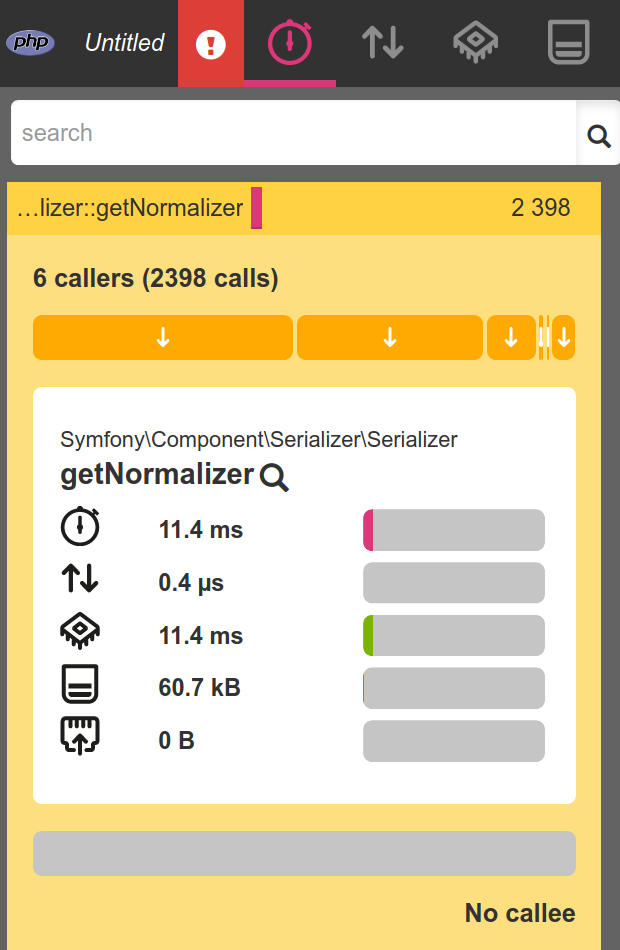 Our proposal to Symfony maker-bundle now makes all generated normalizers Cacheable by default. 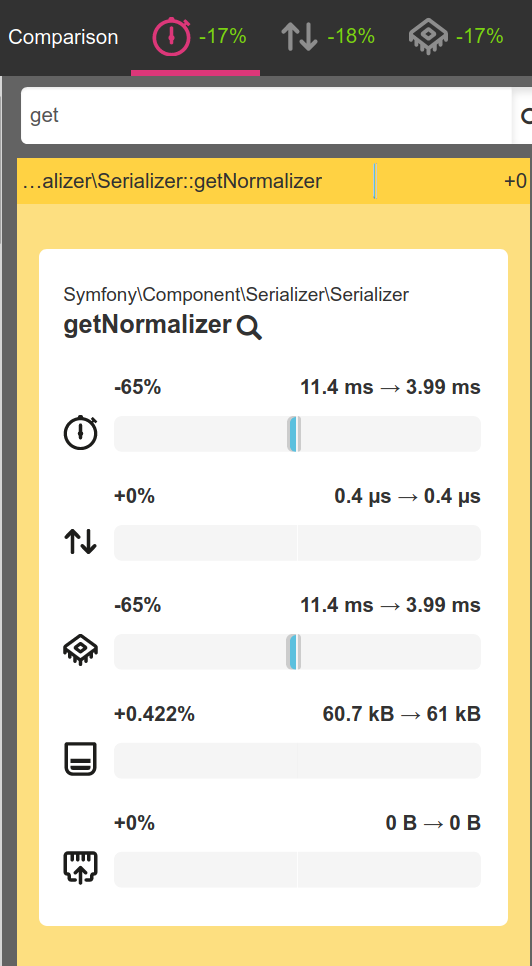 The third test makes sql queries but does not reveal any problems: top time consumer is the sql query itself and that is what we expect.

I detected a few issues in dependencies that resulted in new PRs that got merged: 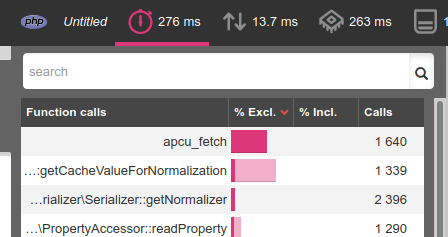 I just added a local cache in CacheClassMetadataFactory and that gives us a nice performance improvement in prod of 10% with warmup / 40% without.. 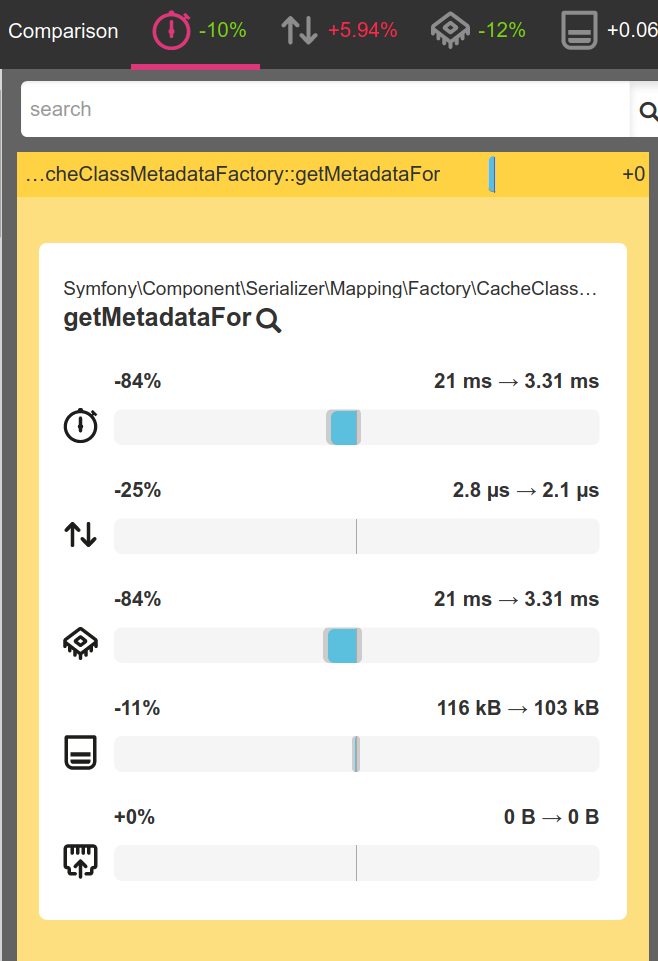 The PR was merged into Symfony 5.1, but a patch for 4.x and 5.0 is very easy to apply thanks to the DependencyInjection:

2/ Symfony: there is a way to override the serialized property name. There was a nice bug that prevented it from being cached, I fixed it for another 6% performance gain \o/. This was merged and released in 4.4.3 and 5.0.3; 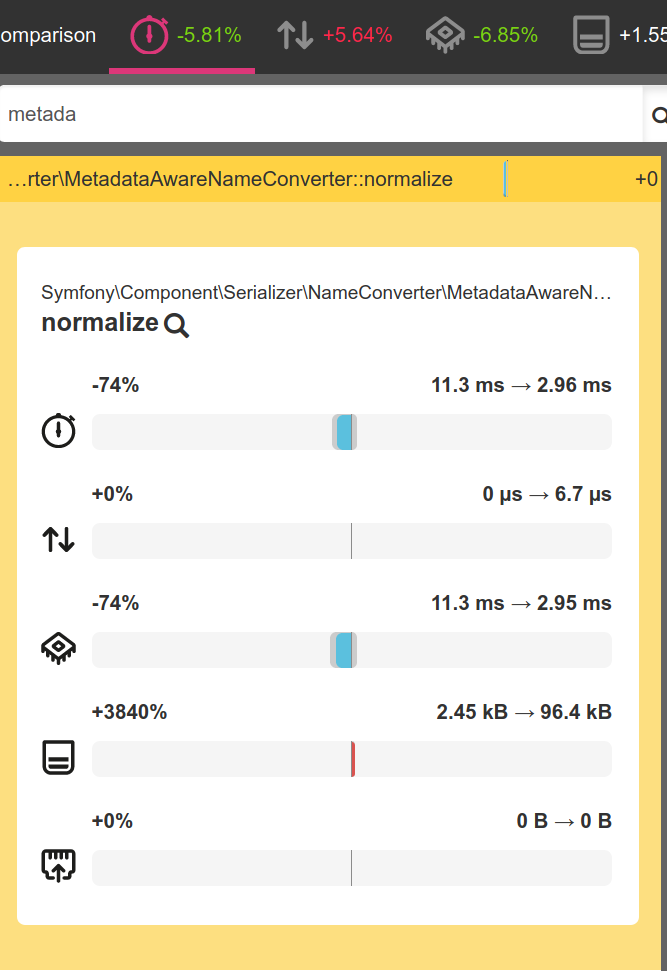 It’s not the first time I encountered that bug, so let’s explain it: we are used to adding class variables as arrays to cache things for the duration of the request. Usually, we check with isset to verify if the cached value exists to avoid recomputation. Here, the computation results in an array or a null value.

So if the array value is null, isset will always return false. Confirmation:

So the optimization is not a isset vs array_key_exists but a misuse of isset. It’s a frequent one and hard to spot without the right tooling.

3/ API Platform: a big computation had no local cache, so the same value was computed again and again. This PR adds a local cache and has been merged and released as of 2.5.4. 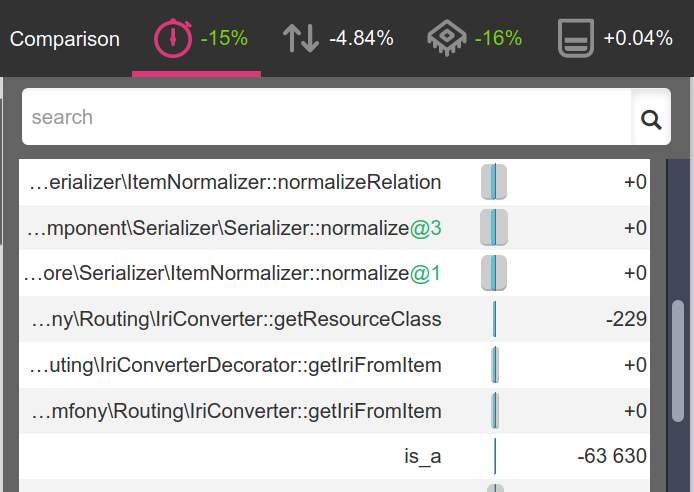 4/ Jane: we use Jane to generate HTTP API clients. We wrote it, love it and maintain it. However, over the last few months, one of our micro services with a large HTTP API added a lot of data types, resulting in a large Swagger file. This Swagger file (30000 lines, 600 schemas and 500 routes) is computed by Jane to generate DTOs and highly optimized normalizers. The problem was that there were too many of them: more than 600. They are now 600 classes to initialize and to ask if they are capable of normalizing a data type (of course these normalizers are Cacheable). We rewrote the way these normalizers are declared, to have a parent normalizer that only checks if the object is one it can handle. Hard to beat a simple array_key_exists.

Section intitulée that-s-all-for-todayThat’s all for today

That concludes our first run of performance improvements. We learned a lot about how the serializer works and the hot paths of a Symfony stack.

I hope that you learned something today and the performance of your application will benefit from it as much as mine. Ben Davies (@bendavies) tried a few of these patches on his prod API and it turned out ok for him:

Spent a few minute chatting to @bastnic
about his recent performance related PRs to @symfony & @ApiPlatform , applied them all (some are unreleased), and…💪

Next article will focus on the dev stack, how it works, what we found and what we learned.

Battle log: a deep dive in Symfony stack in search of optimizations 2/n

This article is the second in a series that explains what we learned and how we discovered new performance improvements. It’s focused on the dev environment. The first article guides us through multiple new optimizations for the prod environment. You should definitely read it first.…